Pope Francis has called for a global revolution to save and fix the earth and the global “perverse” economy!!  If you’re thinking he is calling for an armed revolt think again.  The Pope is calling for a global CULTURAL REVOLUTION in order to correct the world’s “structurally perverse” economic system by which the rich exploit the poor to no end and with the result being the wholesale turning of our planet into an “immense pile of filth.”  Amen to that!! 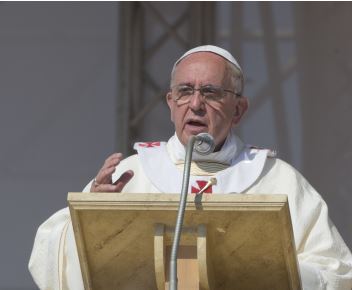 The Pope stated his position in the latest Papal Manifesto aimed at spurring that highly CORRUPT body known as the UN into taking action in the areas of climate change, domestic politics, and everyday life in general.  Regarding climate change the Pope blames it on an unfair, fossil fuel based industrial model that he says harms the poor the most.  In the manifesto he urges ALL PEOPLE of ALL FAITHS or NO faith to experience an awakening to save God’s creation for our future generations.

What the Pope’s Manifesto is, is essentially an indictment against the global Fascist Corporatists and those who like to claim there’s nothing wrong with our global climate.  Pope Francis said that half-way measures simply delay the looming disaster on a global scale.  He said we need to “redefine” our “notion of progress.”  The manifesto is the first Papal encyclical on the environment.  It is being hailed as a game changer in getting people to think about our impact on the environment and our global economic system which is nothing short of a system of exploitation of the poor and working classes.  Of course the Corporatist fossil fuel energy system was quick to criticize the manifesto saying that “energy is the essential building block of the modern world.”  Sadly, I think they’ve missed the point as usual. What is being called for is NOT the elimination of energy and the throwing back of the human race into the Stone Age but a revamping of what we use to produce energy such as changing from fossil fuels to energies like solar, water, wind, etc.  Also being called for is a redistribution of wealth and an end to the rich exploiting the poor and working classes at every turn.

The Pope said he hoped that all of us down on Main Street in our daily lives and our decision makers would have a wholesale change of mind and heart.  He said, “both the cry of the earth and the cry of the poor must now be heard.” He goes on to say that the “vision of might is right” has resulted in overwhelming inequality, injustice, and acts of violence against the poor who compose the MAJORITY OF HUMANITY.  Since the resources end up in the hands of the world’s most powerful, the Corporatists, the winner takes all while the masses suffer even MORE!  He further said that the ideals of Corporatism are in CONFLICT with the ideals taught by Jesus Christ.  The manifesto is 191 pages and is very blunt that should make many Corporatists and climate change doubters squirm.

Some people today seem to still think climate change is a political issue when, in FACT, it is a SURVIVAL ISSUE. Yes our politicians have picked the issue up and tried turning it into a political hotpoint but, in reality, it remains a survival issue.

One of the core points the Pope makes is that there really is NO distinction between human beings, their faith, and the environment.  “Everything is related, ” the Pope said, “and we human beings are united as brothers and sisters on a wonderful pilgrimage…”.  He also said, “The earth, our home, is beginning to look more and more like an immense pile of filth.”  He cites the deforestation of the Amazon (the lungs of the earth), the melting Arctic glaciers, and the death of coral reefs as examples of how humanity is pillaging the earth and putting us all in danger…bluntly, of EXTINCTION!  He also blames politicians for listening more to the oil industry than to Scripture or COMMON SENSE.

Elsewhere in his manifesto Pope Francis praises the “less is more” lifestyle that he himself is known for.  This Pope unlike those before him shuns pomp and pageantry and he has chosen to live in a simple apartment in the Vatican rather than in the Papal Palace with all of its grandeur.  He favors car pooling, recycling, and being in close touch with the poor and marginalized among the human race.  He has repeatedly advocated reaching out to such people instead of shunning them.  His latest manifesto also calls for “courageous,” radical farsighted policies to transition the world’s energy production system from fossil fuels to renewable fuels.

Pope Francis clearly points out in his manifesto that he is NOT suggesting we return to the Stone Age.  However, he says we need to slow down and take a look at reality in a different way and that we need to recover our values and great goals as human beings that seem to have been swept away by “our unrestrained delusions of grandeur.”  That’s what GREED does, in fact!  It blinds us to our humanity and to the things that are truly valuable in life.

Critics say this is just the latest example of this Aventine-born Pope’s “Latin American Style Socialism.”  He has responded to such critics in the past by saying he is not calling for Communism and Socialism is NOT a sign of Communism to care for the poor.

Additionally, the manifesto criticizes those within the environmental movement who show great concern for the environment but tend not to show the same amount of concern for human lives.  It is as if they forget they themselves are human beings.

I think the Pope’s manifesto is a breath of fresh air, frankly!  It calls for a change to being at the grass roots level down here on Main Street instead of some dark hall of government alone.  We all need to be more aware of our own individual impact on the environment.  There are things we could and SHOULD do without.  There are little things all of us can be doing like not throwing garbage out the car window, recycling, cutting our own energy usage, etc. And, we should all start to REACH OUT to the poor and marginalized in our human community instead of shunning them or pretending that they don’t exist.  The fact is they DO EXIST and THEY MATTER if for no other reason than they TOO are HUMAN BEINGS!

The Pope’s manifesto calls for a global cultural revolution but at the same time what it is really calling for is for YOU and me to be SOMETHING MORE than we are now.  And what’s so wrong about that?  Or do we love to wallow in that mud pool we’ve been wallowing in for far, far to long?