Posted by Rob on September 12, 2015
Posted in: Uncategorized. 3 Comments

I’ve been wondering just when the GOP is going to get serious about the 2016 Presidential elections.  It seems to me that they are taking it all as one big JOKE, frankly.  Their leading candidate is billionaire Donald Trump?  Seriously?  The man acts like he’s on just another television reality show and, honestly, I’m beginning to wonder if he himself is taking the election seriously. 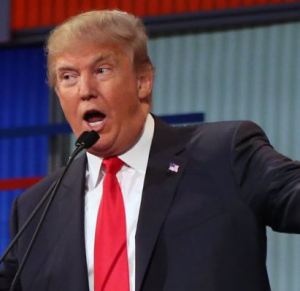 Can you imagine this Corporatist as the next POTUS? Frightening!

Trump is brash and outspoken.  He’s loud and aggressive with no room of political correctness and, apparently, no room for courtesy either.  He says whatever is on his mind no matter what it is and no matter whom it offends.  He wants to build a fence across our southern border stretching from southern California across Texas.  He wants to round all of the illegal immigrants up and deport them within two years.  As for the economy, crime, the rising police state, foreign affairs, and other issues the man isn’t offering a lot of substance.  What he is doing is making brash statements that appeal to the backwoods ultra-conservative good-ole boys in America.  You know, the Hillbilly type guy that would like nothing better than to see slavery reintroduced into America and the type of guy who thinks women should stay pregnant and in the kitchen!  And Trump seems to have the support of several known racist organizations such as the neo-Nazi’s et al although he says he doesn’t need or want their support.  But, those are exactly the people his campaign rhetoric is appealing to!

Can you imagine Trump as POTUS?  It would be somewhat frightening, frankly.  Corporate America would be happier than they’ve ever been and We The People would be paying $10 for a gallon of gas.  The poor would quickly become poorer and the mega-rich would quickly become even richer.   All of the financial crimes committed by Wall Street would simply be ignored as Trump isn’t about to put any of his comrades in jail no matter what.  We’d have more international enemies than we have now and America would become one big soap opera reality show for international entertainment, nothing more.  Oh wait, we already are!

If Trump gets elected the working poor can kiss their Obamacare health insurance goodbye and it wouldn’t take long for this group would quickly move from being the working poor into being the non-working ULTRA-POOR.  Corporate America would never pay any taxes of any kind but we who are the working poor sure as hell would at about three times the rate of what we are paying now.  And war?  Well the rich boys and girls would never go to war and we who are from Main Street America would be put on the frontlines as mere human targets for the enemy, no problem.  Instead of going forward America would quickly go backwards as I strongly suspect Trump would destroy any and all Progressive achievements that have been made in this nation since the Great Depression.  And in case that wasn’t enough racism and sexism would surge in this country like never before I’m sure.  Yep!  Return to those good-ole days when white was right and everything else was wrong.  Yeeee Haaaawwww!  VOMIT!

Of course the more I think about it the more I think I should have expected the upcoming presidential election to be one BIG JOKE because that’s what’s it’s mostly been for the past several decades anyway.  Obama was held up as America’s last great hope but now we all know he’s just another Corporatist with a quick and lying tongue just like all those before him who’ve sat in the Oval Office.

And before that we have the not-so-great George Bush 2 who was about as bright as a doorknob on a rainy day.  Remember that guy?  The one who outright LIED about Iraq having weapons of mass destruction and then joked about it on more than one occasion.  The only thing that “village idiot” achieved was getting us into a perpetual war in the Middle East and turning that region into a cesspool of instability so the likes of al-Qaeda and ISIS could take over and create chaos on a scale nobody could imagine.  Iraq’s Saddam Hussein with CIA connections was removed from power and killed and later Libya’s Momar Khadafi was handed the same fate.  I’m sure he had CIA connections too and I’m sure both were “removed” in order to keep their mouths shut….as in PERMANENTLY SHUT.  And let’s not forget Egypt’s Morsi who was removed and imprisoned (not yet dead) even though he was ELECTED by the Egyptian people DEMOCRATICALLY!  “Freedom & Democracy”?  LOL are you joking?  That line is nothing more than lip service and the whole world seems to know it EXCEPT America!

And remember how Dumbya Bush said that Iraq’s oil revenues would be used to rebuild Iraq after American poor-boy forces devastated that country?  Not one DINAR has ever gone to that purpose BUT a lot of American TAXPAYER money sure as hell has and still is!!  And those Iraqi oil profits?  Well they’ve all gone into the FAT bank accounts of the international Corporatist which is just where many of us knew they’d go.

And let me not stop at ragging on the GOP.  Allow me to rag a bit on the DNC.  Hillary Clinton?  Are you fricking joking?  This woman a former Secretary of State who was responsible for the (just won’t go away) Benghazi Affair that got a sitting US Ambassador killed in Libya and others.  And now there is a criminal investigation into her activities while she was SOS but, of course, she claims she’s all innocent and did nothing wrong.  She isn’t about to help take down the Clinton Dynasty by any way, shape, or form because Slick Willy her husband has a good thing going.  IF you think Hillary Clinton is the answer to all of America’s woes THINK AGAIN because she’s not!  She’s another CORPORATIST pretending to be a Progressive and if Obama disappointed you I assure Hillary will REALLY disappoint you!  I sincerely hope this woman does NOT get the DNC nomination because she’s a wolf in sheep’s clothing.  Another Wall Street wolf!  As far as the DNC goes about the ONLY candidate I see offering viable solutions is Senator Bernie Sanders who seems to be just about the ONLY candidate taking this election seriously.

And so I’m wondering.  What has our country and our society become?  A big fat joke?  Our leaders and our wannabe leaders seem to think so, apparently.

The fact is that the Fascist Corporatist have a stranglehold on this nation and on every other nation on the planet and the reason is because, frankly, “money talks and bullshit walks.”  Money is power in today’s world and those with the money are those with the power.  In contrast, those without the money are those without power….ANY power.  Bernie Sanders is absolutely right when he says that 1% of the 1% wealthiest people in this country control 99% of the wealth!  Do you realize that’s only a handful of people literally?  Don’t think this is all new because it’s not.  In fact, it’s been this way beginning shortly after the Industrial Revolution and it’s only gotten worse as fewer and fewer wealthy people have amassed HUGE sums of money that you and I can’t even imagine.  Anyone who has ever studied sociology, economics, or political science knows this to be the case and it’s all nothing new to us!  And the funny thing is that President Dwight D. Eisenhower tried to warn us of this growing Military-Industrial- and now Banking Complex that was taking over and that he told us to beware of in his last speech from the Oval Office.  Sadly, no one really paid attention to his warning because Americans thought “It just can’t be so, can it?”  But, Eisenhower’s warning even though unheeded as now become NOT the “American Dream” but the “American NIGHTMARE!”

Finally, here’s something else Americans had better wake up to.  Since JFK was murdered in Dallas, Texas in 1963 we haven’t had a real American POTUS but a consistent line of CORPORATIST.  And NONE of these leaders ever had any intention of “saving America” because THEY were/are the PROBLEM!  The Corporatist have been raping and pillaging this nation for decades now bleeding the richest and most powerful nation on the planet and virtually bringing it to its knees and, sadly, they’ve succeeded.  Why?  Because like I said those with money have the power and those without money have no power.  So if you actually think that one of the Corporatist are going to “save America” think again!  Oh yes, they’ll pay you lip service but their real agenda is to continue the status quo in this country and that status quo is to continue to pad the pockets of their own kind…..the Corporatist.  And don’t hand me this CRAP about if only a “regular American” from Main Street was put into the White House all of our woes would be solved.  The BLUNT FACT is that a regular American has ZERO chance of ever winning the White House because in case you haven’t noticed America’s elections have become one big lottery overflowing with money that the regular American DOES NOT HAVE and never will have for as long as these Fascist Corporatist hold on to power and wealth.  Dream on!

It astounds me that the very families (read the Bush Clan et al) who financed the rise to power of the Nazi Fascist mass murderer named Adolf Hitler now rule America as their personal fiefdom and no one QUESTIONS them or holds them accountable!!  At the end of WW2 these bankrollers should have been thrown in prison with their Nazi comrades who served Hitler!  They bankrolled this psychotic killer and they are just as GUILTY as Hitler himself period!  Without THEIR MONEY Hitler would have never come to power.  Yes Hitler’s party called themselves “National Socialists” but they were anything BUT SOCIALISTS!  They were FASCISTS and fascists are NOT Socialists!!  Think about it!!

So, returning to my original point about the GOP seemingly not taking the 2016 election seriously (and the DNC too for that matter) it’s time we ask ourselves what we’ve become as both a nation and a society.  Just what have we come to in America today?  Is everything in and about our society, nation, AND OURSELVES just one big JOKE now?  Have we become so lethargic and wigged out on our “medications” pushed on us by our MD’s (nice name for legal drug pushers) that NOTHING resonates within us any longer?  Are we just a nation of ZOMBIES?  Or are we common folk so miserable now that we just don’t give a damn and just want it (our nation and our society) to be over and we don’t care how it ends?  I would hope that is not the case but, sadly, something deep within me tells me that IS the case.  This is the 21st century not the 1800s yet we still face the SAME problems in this country with racism, sexism, economics, and a political process that is BEYOND CORRUPT.  When I was younger I thought that surely by this time we would have resolved these issues but I was WRONG!  These issues are not resolved and are bigger now than ever!  That’s a SAD STATEMENT not only about our nation but about WE THE PEOPLE!

Soooooo ya’ll stay tuned for the next episode of “As America Dies Even Moreso.”  I’m sure the reality STAR Donald Trump and Hillary Clinton have many more surprises and much more DRAMA in their bag of tricks for we the gullible!  What a frickin’ FARCE!!!!