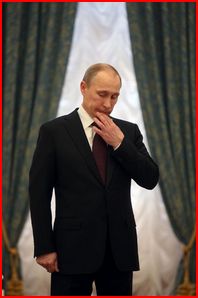 The conflict between Russia and Turkey is heating up as is the new Cold War between Russia and the United States.  Why?  Because Russia’s Vladimir Putin revealed the truth during the recent G20 conference.  What truth?  Putin let it be known that Turkey has been aiding and abetting ISIS.  Apparently, Turkey has been buying oil from ISIS and ISIS has a nice little operation going via truck convoys shipping oil into Turkey.  Further, even though Turkey claims they are an active part of the war against ISIS the FACT is Turkey has been bombing the Kurds rather than ISIS.  Turkey has been playing a cat and mouse game using a smoke screen and Putin has exposed that smoke screen for all the world to view and Turkey doesn’t like it one bit!

We’ve all been wondering just how ISIS got so much money and military hardware so quickly.  Now we know!  Turkey has not only been aiding and abetting ISIS but they’ve also been financing ISIS.  Turkey is using its military armaments to kill the Kurds and has apparently been protecting ISIS even providing the TERRORISTS with air cover.  But Turkey is not alone.  Saudi Arabia, America’s “good friend” has also apparently been aiding and abetting ISIS financially if not in other ways.  It’s been proven time and time again that the Saudi’s CANNOT be trusted yet the American administration continues to trust them for some insane reason.  Saudi Arabia is NOT our friend and I’ve said that many times.

Putin says there are many more Western and NATO nations that have been supporting ISIS in arms and money and those nations fear that Putin will expose them like he did Turkey.  Meanwhile, the Turks shot down a Russian war jet allegedly over Turkish airspace instead of escorting it out of their airspace which is CLEARLY a warning to Vladimir Putin to keep his mouth SHUT!  And now Turkey’s president has warned Putin not to “play with fire.”  What’s that mean?  I suspect it means TURKEY has some very CLOSE ties to TERRORIST ORGANIZATIONS around the world all of which have sleeper cells in various nations including inside Russia!  And so do the Saudis and the Iranians among other Muslim states!

The TRUTH has now been revealed and we have Putin to thank for exposing the truth.  I long suspected ISIS was being helped and financed by some country or countries and Putin has now proved my suspicions absolutely right!  The WEST has actually been helping ISIS and that explains fully why President Obama made the statement not so long ago that the “war on terror” was “over.”  What he obviously meant was that war was over because we are not aiding and abetting ISIS and other terror orgs!  That is DISGUSTING!  That is TREASON!!!

What we are witnessing right now is a growing tension between Russia, Turkey, the West, America, and various other Muslim states.  What we are witnessing right now is the lead-up to WORLD WAR 3!  The tension that is building over ISIS and Syria is going to come to a breaking point and that point may well have already been reached with Turkey’s downing of the Russian fighter jet.  The world is now closer to world war than ever before in my estimation.

NATO has now PROVEN beyond any doubt that it is a pack of backstabbing, lip-service paying, CHARLATANS with no loyalty to allies whatsoever!  It’s a pack of HORNETS!  It only APPEARS to be the Western Alliance but it is far from that and should be DISSOLVED IMMEDIATELY because it now appears that NATO is nothing more than a CRIMINAL CARTEL just like the United Nations!

America and the world lost thousands of innocent lives on September 11, 2001 with the destruction of the World Trade Center in New York City.  Does anyone remember that because apparently Western governments including the US have forgotten that fateful day.  For Western governments to now be aiding and abetting the terrorist demonic org known as ISIS or the Islamic State is a slap in the face to EVERY victim of 9/11.  And it is also a slap in the face to every victim of the Paris attacks a few weeks ago!  How dare these governments who proclaim democracy and liberty assist ISIS in secret!!  They can proclaim liberty and democracy all they want but their words mean nothing!  These governments are TREASONOUS!

And ISIS?  This is a RADICAL MUSLIM TERRORIST ORGANIZATION that is bent on wholesale human slaughter period!  They kill Christians, fellow Muslims, AND their own members!  ISIS is MURDER INC!  They just murdered one of their poster girls for her attempt to exit the org!  They enslave women and use them as SEX SLAVES for their fighters!  Those women who refuse to be sex slaves are KILLED!  ISIS members have killed Christians by crucifying them ( a horrible and slow way to die btw), cutting out their hearts, and EATING THEIR HEARTS!!!  They have gone from town to town in Syria and Iraq slaughtering fellow MUSLIMS without mercy or without even thinking about it twice!  ISIS, in fact, has KILLED MORE MUSLIMS than any other group yet they maintain they are Muslims!  What ISIS really is is a pack of ABSOLUTE INFIDELS in every sense of the word!!!  And these are the people Western-NATO nations have been aiding and abetting????

We now live in a world which is steeped in BARBARISM!  A world in which NO ONE can be TRUSTED and in which EVERY LEADERS word must now be automatically assumed as a LIE!  A world of FAKE compassion and concern!  A world of FAKE remorse and FAKE values which mean NOTHING!

Here’s what you not only need to know but what you had better WAKE UP TO QUICKLY!

The breaking point is coming and when the world reaches that point all hell is going to break loose!  We are going to see war and civil chaos like none of us wish to even think about!  We are going to see MASS DEATH on a scale that most of us cannot even imagine and don’t want to imagine!  We are now closer to Global Thermo Nuclear War than at any time during the old Cold War in my estimation and THAT is DANGEROUS!!!  But what did we think the end result would be of our TWO FACED actions?  What did we think was going to be the end of us all with our allowing TRAITORS TO RULE OVER US?  Just how utterly IGNORANT have we been???  I have a bad feeling we are soon to find out!  The US and NATO destabilized the Middle East via the removal of Saddam Hussein, Hosni Mubarak, and Moammar Qadafi.  We opened up a hornet’s nest!  Too bad we took no heed to the old wisdom of sometimes it being better to take the lesser of two evils.  NOW we’ve got a much worse evil in the Mid East than Qadafi, Hussein, or Mubarak ever posed.