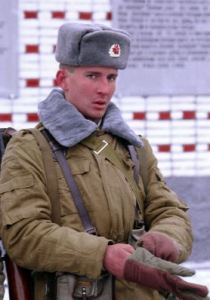 Igor the Thug: “Move along Comrade America! Nothing to see here!!

We have now come to the point regarding the Clinton emails and her use of a private server at which CRIMINAL ACTIVITY is now undeniable. And as of today we now have come to the point to which it is clear that the FBI and the State Dept colluded (read ignored evidence) of the GUILT of Hillary Rodham Clinton and her involvement in criminal activity.

The latest FBI released documents on Clinton PROVE that there is CORRUPTION at the highest levels. The FBI released the documents this afternoon and Clinton’s opponent, Trump, says the documents are “very big and unbelievable.” The documents reveal that the FBI colluded with the US State Dept to make Hillary Clinton look less guilty. Those documents seem to indicate that an Undersecretary of State proposed to the FBI to change a classified email to the designation of “unclassified.”

That US Undersecretary is named Patrick Kennedy. In response the FBI would contacted another unnamed individual and “pressure” them to change the designation of the email and in exchange for this the US State Dept was willing to “reciprocate by allowing the FBI to put more agents in foreign countries where they are presently forbidden to be.” In other words, the US State Dept was offering the FBI a SWEET DEAL direct from one of those old, dark, smoky backrooms that DC is so noted for!!

The deal was allegedly rejected by the unnamed individual who was supposed to have changed the classification.

Trump is calling today’s revelation “on of the big breaking stories of our time!” He went on to say, “This shows corruption at the highest level and we cannot let it happen…” Trump suggests that the American people see how the MSM covers this breaking story noting “the press likes NOT to cover it.” He added that the best thing Clinton has going for her is the MSM and without them she wouldn’t even be in the presidential race at all.

Trump says the documents released today prove that there was collusion between the FBI, US State Dept, and US Dept of Justice. Trump then called on Undersecretary Patrick Kennedy to resign immediately, as well he should along with the DIRECTOR of the FBI, Comey and Loretta Lynch, head of the DOJ. Further, Hillary Clinton should immediately QUIT THE POTUS RACE in DISGRACE!!

Trump has said that if elected POTUS next month his Attorney General will appoint a Special Prosecutor to re-investigate the Clinton email scandal and he’s also said if elected Clinton will go to jail.

Obviously there was or there was an attempt to thwart justice when it comes to Clinton and her use of the private server and her alleged exposure of US secrets. Now if you recall the FBI’s director Comey determined that Clinton had no criminal intent to break the law and he dismissed the case out of hand and refused to file charges against her. So one must as, at the end of the day, did Comey accept the offer from Kennedy? I think he did and I’d be highly interested in knowing if we now have FBI agents in countries where they were once forbidden.

This, I assure you, is just the tip of the iceberg! This kind of CORRUPTION goes on all the time in government at ALL levels and one reason is that we have too many “professional politicians” that have been in office too long and which have become too comfortable! These people need to go! This is why there needs to be strict TERM LIMITS!

Barack Obama will never appoint a special prosecutor to investigate Clinton and if Clinton is elected POTUS her actions as Sec of State will nicely be swept under that old dirty carpet quickly to be forgotten. Americans need to seriously take a close look at this woman, what she’s done, and what she may do if elected.

The short of it is this….anyone else would have been already prosecuted and imprisoned and many people who have exposed state secrets have already been imprisoned for LESS than what Clinton has apparently done! Clinton should receive NO special treatment period! And here’s something else BLACK AMERICA needs to consider deeply……………..

The result of Bill Clinton’s tough stance on crime was the imprisonment of a disproportionate number of young BLACK men! The Clinton’s have said that this was a “mistake.” Mistake? LMAO I think it was a HORRENDOUS MISTAKE! And I’m sure Hlllary will follow in her husband’s footsteps if elected so GET READY BLACK AMERICA for Round 2!!

One comment on “FBI and State Dept Colluded on Clinton!”