Time to Militarize the US-Mexico Border!!!

Since the horrible events of 9-11 US Border agents have ROUTINELY found discarded para-military uniforms along the US-Mexico border. All of these uniforms have Arabic writing on them and some have patches sewn onto them depicting the planes flying into the WTC towers in NYC. Mexicans aren’t the ones wearing and discarding these uniforms so who is? 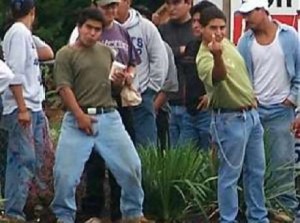 Additionally,, Venezuela has long been training young Muslim men from Iran, Syria, Somalia, and other Mid Eastern countries in how to appear as Mexicans. They teach them Spanish and Mexican culture so that they can enter Mexico and make it to the US border where they then cross over into the US illegally and all the while pretending to be Mexicans or Central Americans. But they aren’t! They are Middle Easterners!!

Now, although it’s been going on for a while and many rumors have swirled, now the MSM is reporting that Hezbollah and ISIS are both entrenched in Latin America and in particular in South America. HELLO! They’ve been there for a while and I’ve reported on this before!! They are engaged in drug running, money laundering, and have made business arrangements with the drug cartels among other things.

NONE of this is new! In fact, ALL of this is “old news” to some of us! Yet, the MSM is trying to pretend it’s new. Where in the hell have they been? Living in a cave? Our government has known these things and yet they have pretended like “it just ain’t so.” But it IS so! The REAL THREAT on the US-Mexico border is NOT illegals from Mexico, Latin America, or South America. The REAL THREAT comes from these young Muslim males pretending to be Mexicans and YES they ARE terrorists! When we think of secure borders we think of stopping illegal immigration from Mexico but, frankly, I think that is the last of our worries. Our BIGGEST worry should be these MID EASTERN TERRORISTS illegally entering the US via Mexico!!

This is why I chuckle when I hear some US official talking about securing our border. It’s because they are focused on stopping the illegals from Mexico but they never breathe a word about these young Muslim males pretending to be Mexicans and they never breathe a word about TERRORISTS orgs like Hezbollah and ISIS are now in alliance with the drug cartels and that they now have a firm “working relationship” with the drug cartels. WHY was this problem not nipped in the ass when we first caught wind of the Muslim terrorist presence in Latin America? WHY have these terrorists from the Mid East largely been allowed to roam freely and unhindered? You would think that this growing problem would be a MAJOR concern for American NATIONAL SECURITY but, in fact, it seems to be secondary IF at all.

Our borders SHOULD have been secured long, long ago. In fact, Dumbya Bush should have put the US military on the US-Mexican border immediately after the tragedy of 9-11. And that US military presence on the border SHOULD have been continued by Obama and Trump. But, instead, very little was done and has been done to secure our border and now suddenly we think a physical wall costing billions of taxpayer dollars is going to solve the problem Well it’s NOT! The drug runners, human traffickers, and MUSLIM TERRORISTS will simply do what they do already and that is they will tunnel under it.

The thinking is Washington is beyond illogical and rational. Our government seems to have its priorities GROSSLY confused. Our border with Mexico SHOULD have been militarized but instead of doing that Bush II sent our military to such GOD-FORSAKEN places such as Afghanistan and Iraq and he outright LIED about the reason for doing so. We now know that there were NO weapons of mass destruction in Iraq and never were.

So here’s where we are today. These Muslim terror orgs are now FIRMLY entrenched in Mexico, Latin America, and especially in South America. Our simply ignoring them has enabled them to achieve this. They now have a FIRM working relationship with the drug cartels and, again, by ignoring this FACT it has enabled them to forge these relationships. As far as I can see Islamic terrorism is STILL a GROWING threat and now it’s in America’s backyard virtually unabated!! In fact, our government has FAILED us! Our borders are NOT secure! A stupid and grossly expensive wall isn’t going to do anything significant other than WASTE our money! It’s time to set the US military on the border with Mexico and WITH weapons and armaments and not simply as observers! Our nation is in grave danger NOT from illegal Mexicans but from these young male MUSLIM TERRORISTS orgs!! HELLO!! You don’t have to be an Einstein to figure it out do ya?  I’ve been warning about this for a long time and FINALLY some people are getting a clue!  Hope it’s not too late!!

2 comments on “Time to Militarize the US-Mexico Border!!!”